Today, I am excited to share Alexander Nader’s newest release, 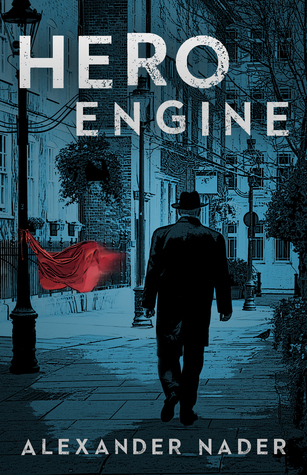 ‘Cool’ Jim Quig has one love : his job. And he likes it that way. While Jim protects the streets, the heroes take all the credit. He’s fine with that, all cops are. Sort of. So when the director of the Super Hero Initiative (SHI) asks Jim to help solve a mystery plaguing SHI headquarters, he’s not interested. Who cares if an ancient artifact known as the Hero Engine has been destroyed? Or if every super hero in existence was altered into their superhuman state by the device? It’s not Jim’s problem. The ‘capes’ can solve their own mystery.

The director doesn’t take no for answer and Jim’s task is to not only find out who destroyed the Engine, but why one hero has gone AWOL. For the last fifty-two years, SHI has protected the world, but with the destruction of the Engine, and a rogue killing super humans, the golden era of heroes has ended. Cool Jim Quig is about to find out what happens when a cape goes nutso.

If only he had just said no to the guy in the flashy suit.

Check this book out, guys. It’s quick-witted, fast paced, and well written.  Worth a read, along with Alex’s other books as well.

Get the book
Amazon – Barnes & Noble – iTunes – The Book Depository

About the Author
Alex lives in the tourist infested hills of east Tennessee with his amazing wife/muse and three superb children. He would tell you more about how awesome they are, but you probably wouldn’t believe him. When he’s not hanging out with them he’s making pizzas. When he’s not doing that he’s working at a bookstore and occasionally he jots a few words down. He’s a big fan of good music, good storytelling, and mixed martial arts.

He once wrote a short story about pirates to his wife via text message that blossomed into a full length novel and never stopped after that.