As a very special surprise on this Independence Day, I am revealing Emi Gayle’s Cover and Blurb for her upcoming NEW ADULT DYSTOPIAN novel,

Back of the Book:

Like all the citizens of the American Union, eighteen-year-old Erianna Keating is not to ask questions. She is not to believe anything except what the A.U. tells her. More importantly, she’s not supposed to know what she doesn’t know, nor that she’s a pawn.

Or is she? Are they?

Erianna thinks going to Perry Road and joining the national registration program is her next step toward adulthood; the 2132 candidates for adult-classification, though, are in for a big surprise. Especially Erianna.

Thanks to Zane Warren, an awkward but hot guy who won’t shut up about a history that doesn’t—orshouldn’t—matter anymore, Erianna will know. Will learn. That includes finding out what actually happens after registration and doing something, anything, about it.

Fixing what went wrong, what caused the U.S.A. to split into two countries, though, is not on Erianna’s bucket list, but as she faces her future, she must decide whether to fall in line with the American Union’s plan for her, or to consider that Zane might not be wrong, and the time for revolution begins now.

Can’t wait for this to release! I’m an Emi Gayle fan and loved both YA novels from her, AFTER DARK & DAY AFTER, so I’m really excited about this book.

If you want to add it to your TBR list on Goodreads, here you go: Add to Goodreads

About the Author, Emi Gayle:

I had a really great bio in my head around midnight one night …. right before I fell asleep and it disappeared into the nothingness of unconsciousness. Bummer. So here’s something less well thought out.

I want to be young again, so I’m kinda sorta living it again. At least on paper. You see, I write paranormal romance. Now, that stuff can get really hot, and really gritty and well … mine does. But! My characters are teenagers, 18 and under. Like I was once … and want to be again.

Why would I want to be a teenager again? Geez. Because! If you met the man of your dreams at 14 was engaged to him at 19 and married him at 20, wouldn’t YOU want to do all that over again? Especially if you were still in love with him? I mean, c’mon! It’s love! That’s why I write, too.

You see… just because you pass a certain age doesn’t mean you forget what it was like to be 14, 15, etc. Actually, because I kinda grew up with my husband, we both still feel like the 14 and 17 year old kids we once were. So that’s where I’m coming from. You might think it’s totally lame, but you know what? That’s ok! Maybe you’ll like my other me instead. 😉

Cover Reveal: TIED (Book One of The Fire Born Novels!) 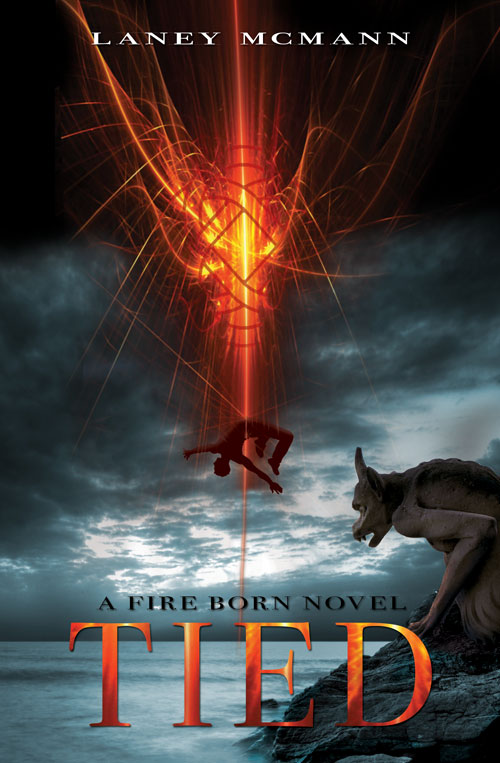 Normal people don’t believe their nightmares stalk them. They don’t fall in love with boys who don’t exist, either.

Seventeen-year-old Layla Labelle, though, is far from normal. Her delusions walk the earth. Her hallucinations hunt her, and her skin heats to a burn every time her anger flares.

Or is that all in her head?

Layla doesn’t know what to believe any more because if none of that’s true, Max MacLarnon must be an illusion, and her heart must still be broken.

No matter how much she wants to believe Max is real, doing so would mean everything else is, too. How, then, is that possible?

The answers lie in an age-old legend the supernatural aren’t prepared to reveal, and with a curse that could tear Layla and Max apart forever—if it doesn’t kill them both first.

In TIED, book one in the Fire Born trilogy, learning the truth will mean fighting an arsenal  of demons, and being with Max will put Layla on a path toward her own destruction.

Just how far will Layla go to protect the one she loves?

The answer may never be far enough … away.

Add it to Goodreads

TIED Cover Reveal in ONE DAY!

Book One of The Fire Born Novels!